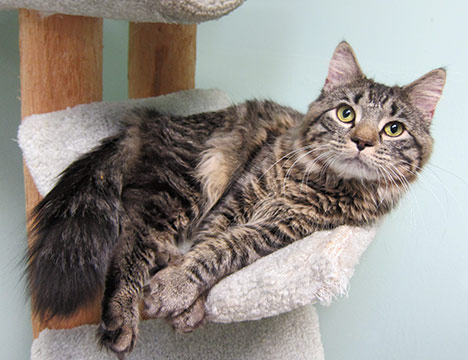 Lincoln is a vibrantly healthy stray tabby brought to PAWS in mid February. He’s a young cat, about two years old.
Lincoln is very confident, friendly, and active. A master of the wand toy, you should see his airborne gymnastics, hunting and leaping.

He played until he was panting and I hid the wand toy away. Then Lincoln laid down to rest in the most peculiar way. Look at his flat rear and the way his back legs are splayed. Do your cats lay like that? Maybe he’s part rabbit…

Handsome Lincoln is happy to be off the streets, but his rags to riches story would have an even better ending if he were elected President. Or got adopted.

Purrs he finds a wonderful forever home soon. Our human says the photo of him lying like that would do it for her!

Lincoln is awesome! He is definitely a great jumper, and with that legs-splayed pose … maybe he IS part bunny! 🙂

Such a handsome dude! My late Brother Ivan used to lay like that.

He’s just got flexible ligaments :-). What a sweetie.

Lincoln, you look like such a fantastic cat. Bet you do enjoy life. We so hope you find a great home and very soon.

Lincoln sure has character. We purr that he finds his home soon.

He sure is a handsome boy! Our Sophie lays like that – it’s always so funny looking! 🙂

What a sweetie Lincoln is! We bet you’re a real fun-seeker!

We’ve seen a couple of kitties on other blogs pose like that… but no one here does it. We agree with meowmeowmans… Lincoln must have a little bunny in him!

Lincoln is such a handsome kitty with gorgeous tail! He sounds very playful. And his resting posture…..so cute and precious! I hope he will find forever home soon!
P.S. About your comment, Goro sleeps with his dad. We sleep in separate bed, because otherwise kids start a cat fight!

What a handsome cat! I hope that he finds a forever home soon!

He looks like a sweetie, I am sure someone will snatch him up soon.

well he is mighty handsome

so glad he was found and brought in to find his furever home!!!

What a handsome boy Lincoln is, love that pic of him with his legs out! Sending big purrs his way for a safe, loving forever home to come forward for him!