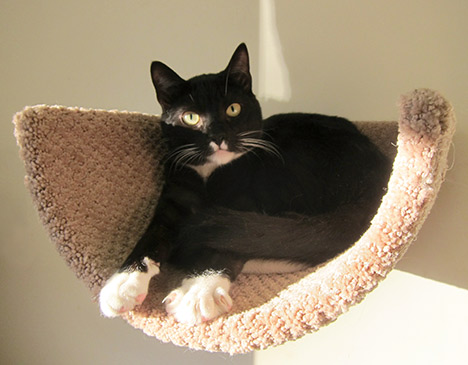 We made a new wall-mounted carpet-covered perch for the PAWS cats and installed it. Geraldo was the first to try it out. And then he was adopted. 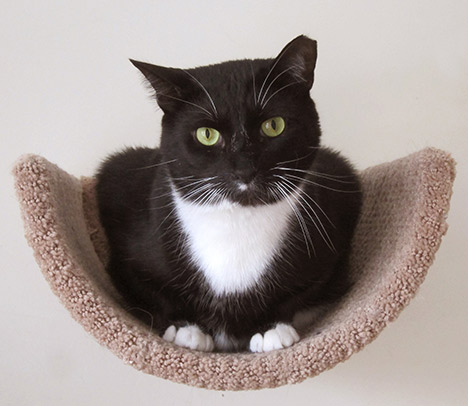 Roger tried it out next. And then he and his brother Brian GOT ADOPTED! 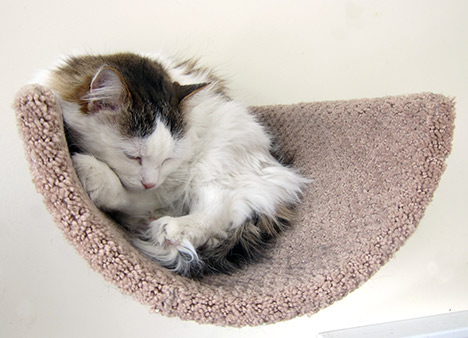 Lieutenant Uhura found it very comfortable. Guess what happened next? She was adopted. 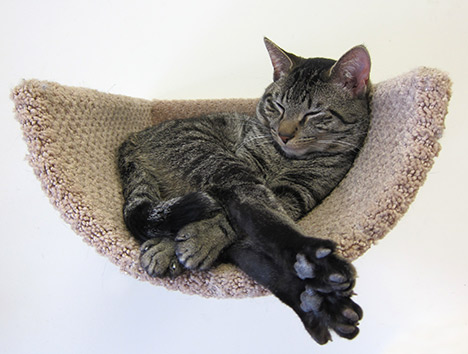 This is two year old Rob Roy. What a sweet boy! I sure hope the luck of the wall perch holds, and he won’t be waiting long for his forever home. 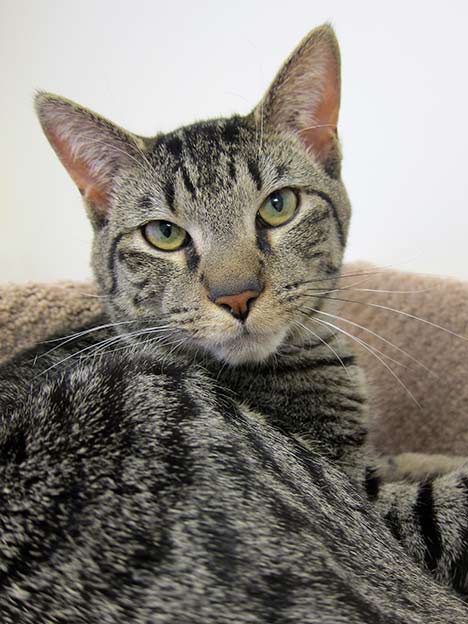 He sure is handsome!

UPDATE: Rob Roy has been adopted!

Maybe we need to rotate all the Room 8 cats, so that they ALL get some time in that lucky perch! 🙂

Made that perch? Wow, that’s pawsome!
And sounds like it’s a very lucky perch. How wonderful so many kitties got home after using it. I hope the perch will bring more and more forever homes!

Wow, that IS a lucky perch. We hope it works for Rob Roy.

That is not a flook!! Rob Roy WILL be adopted I’m sure!! Great perch!!

Surely, that’s the ticket. And with that face and oh my, those toes! Rob Roy’s turn will be coming up next!

Besides that Rob Roy is oh so very handsome, it may be helping that potential adopters see the cats at eye level!

Wonderful News!
Darling pictures!
Get one of those Lucky Wall Perches for every room!

That is a magic perch- I hope it works for everyone.

oh I love it!! I bet the lucky streak will continue!

Sounds like you need to build some more of those wall perches!

We’ve never seen one of those perches before – we think it looks pawsome.
Luv Hannah and Lucy xx xx

We need more of those. Did you contact the company? It’s great advertising. I’m curious if the height is a factor? And I’m expecting another good luck story 🙂

He is indeed a handsome boy. We hope that perch works for him as it has it’s previous inhabitants. If it does, will you please give our sweet, sponsored kitty, Swizzle, an opportunity to try it out. Thanks so much for joining our blog hop. We hope this gives Rob Roy the extra exposure he needs to find a new home. XOCK, Lily Olivia, Mauricio, Misty May, Giulietta, Fiona, Astrid, Lisbeth and Calista Jo

What a cool, and lucky, perch! Hope the luck continues for many a kitty!