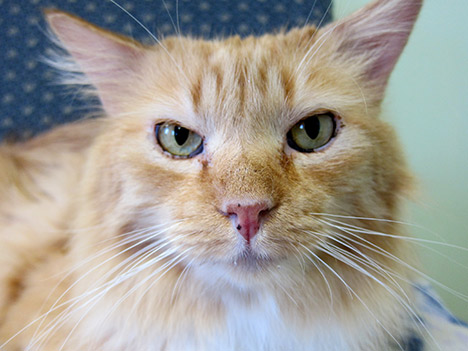 When Milo came to PAWS, he was unkempt, battle scarred and fierce. It was months before he realized that he’d hit the jackpot. First we had to continually remind him that humans could be trusted. It was a long process and emails went out among the staff and volunteers celebrating every mark of progress.

And boy, did he make progress! He became the calmest, sweetest lap cat who never willingly ended a brushing session. All the other cats in his room wanted to be near him.

And this week, two years later, it finally happened… the moment we’ve all dreamed of. Milo has left us for a real home of his own.

Your loud PURRS and sweet demeanor will be greatly missed by your family at PAWS. I have never met you, but your pictures and your willingness to trust again are inspiring. To know a cat is to love a cat. Milo now has his person to love.
Best wishes and LOVE to Milo!

Oh Milo, that is so wonderful. Great way to start the weekend with your good news. We sure are excited for you. Take care.

That is the best, best, best news and we all have happy tears! Hooray for Milo and his new family!!!!

Happy ever after for Milo! He hit the jackpot twice!!!

Oh what a beautiful story!!!
YAY for Milo! Every cat deserves a loving forever home. And we are so happy to read about dear Milo.
xoxoxo

All of you did wonderful work with Milo. And Milo did great in giving the humans a second chance! Be happy at your forever home, Milo!

So glad that Milo finally found a home! I remember what a miserable state he was in when he first came to PAWS, and by the time I moved away a few months later he had already come so far. What a great success story! 🙂

We just was that handsome Milo has his furever home after all this time – we are so pleased for him and his new family.
Luv Hannah and Lucy xx xx

Concats to Milo! So happy for him!
Purrs

Milo is the sweetest boy ever! We all miss him so much already, but are THRILLED that he’s finally found the loving home he so deserves. 🙂

My handsome boy is doing well! He’s still quite shy and getting used to the strange sounds around here, especially the television, so I try to make things as quiet as possible until he gets more confidence. Even still, he has a full appetite and is getting along reasonably well with his new brothers. His fur looks AMAZING because showing him the brush is the easiest way to get him to come out of his hiding places, so he’s constantly getting groomed, which he relishes. (I think it’s a trick. I think he has manipulated us simple-minded humans by playing up his shyness in order to get spoiled. His life right now is a steady stream of brushing and cat nip.) Soon, I’m sure he’ll hit his stride again. I’m so happy to have this special kitty in my home 🙂