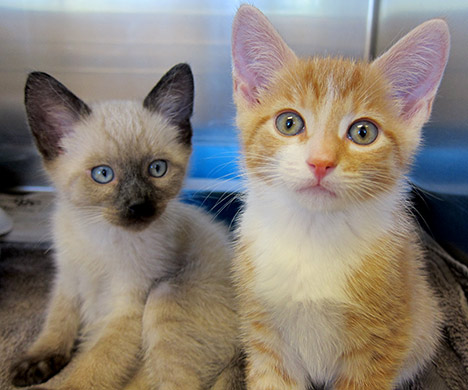 A group of adorable kittens (not to be redundant) were brought to PAWS recently. I don’t know what their Mom looked like, but she had excellent taste in mencats.
Could these two really be brothers?
What do you think?

Baby boom at the shelter! 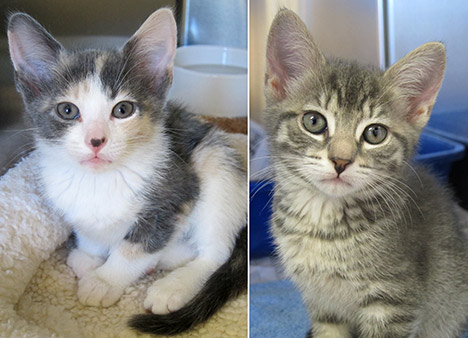 I could scoop them all up and run off with them – they have a great big squeeeeeeee factor!
Luv Hannah and Lucy xx xx

OH, they don’t get any cuter than this! And YES, of course they are brothers! And I do mean genetic brothers.

In college our gray tabby, Regan, had several litters of tabbies, each tabby filled litter had one white kitten! The first time it was a surprise when the Siamese seal point markings appeared on the white one. The next litter had a chocolate point, Sinbad. Sinbad moved to Kansas City with me and his gray tabby littermate, Striker.

Knowing this white kitty trick, when I was asked to babysit a tabby mama & her litter, 3 gray tabbies, one yellow tabby, one solid white, I knew what was coming! I adopted two from that litter: the runt of the litter a gray tabby, Hershey Kiss and the white one, Stardust Cowboy. Cowboy kept his baby blue eyes and developed gorgeous rose points, yellow/orange Siamese markings.
Hershey and Cowboy were spectacular cats!

The short answer to your question. Yes they are brothers.

Although they don’t look like twins, they are equally and purrfectly cute! SQUEEEEE! Such gorgeous babes. And those EYES!!!
They are going to make some families SO happy.
(((purrs)))
Katie & Glogirly

FUJI!!!!!!!! Mom says if all goes right, you are going to be our new baby brother! Wheeeeeeee. whee.whee.whee!!!! Can’t wait to welcome you with furry arms!

Oh those kittens are all so adorable! How lucky you are to be around such cuteness. We wish them the best of luck and hope they are at loving homes soon.

Makes me want to take all the kitties home, especially the Siamese. I guess they are related though marty thought that the Siamese might have been thrown in with the others when paws agreed to take them.

So adorable! Yes, it’s funny that they are siblings, isn’t it? We’re so excited that your friend is adopting Fuji! Woohoo!